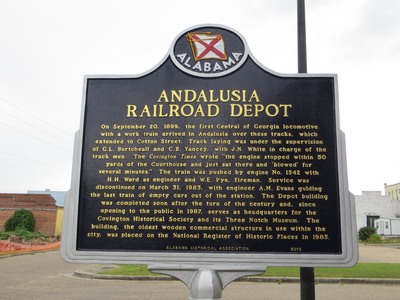 The marker reads: “ANDALUSIA RAILROAD DEPOT MARKER On September 20, 1899, the first Central of Georgia locomotive with a work train arrived in Andalusia over these tracks, which extended to Cotton Street. Track laying was under the supervision of G.L. Burtcheall and C.B. Yancey, with J.N. White in charge of the track men. The Covington Times wrote “the engine stopped within 50 yards of the Courthouse and just sat there and ‘blowed’ for several minutes.” The train was pushed by engine No. 1542 with H.H. Ward as engineer and W.E. Pye, fireman. Service was discontinued on March 31, 1983, with engineer A.M. Evans guiding the last train of empty cars out of the station. The Depot building was completed soon after the turn of the cemetery and, since opening to the public in 1987, serves as headquarters for the Covington Historical Society and its Three Notch Museum. The building, the oldest wooden commercial structure in use within the city, was placed on the National Register of Historic Places in 1985. ALABAMA HISTORICAL ASSOCIATION 2013"