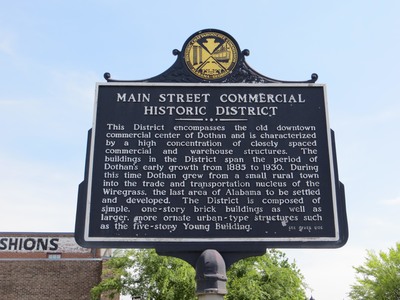 The marker reads: "MAIN STREET COMMERCIAL HISTORIC DISTRICT This District encompasses the old downtown commercial center of Dothan and is characterized by a high concentration of closely spaced commercial and warehouse structures. The buildings in the District span the period of Dothan’s early growth from 1885 to 1930. During this time Dothan grew from a small rural town into the trade and transportation nucleus of the Wiregrass, the last area of Alabama to be settled and developed. The District is composed of simple, one-story brick buildings as well as larger, more ornate urban-type structures such as the five-story Young Building. SEE OTHER SIDE". Top of the sign: Historic Chattahoochee Commission Alabama-Georgia emblem.