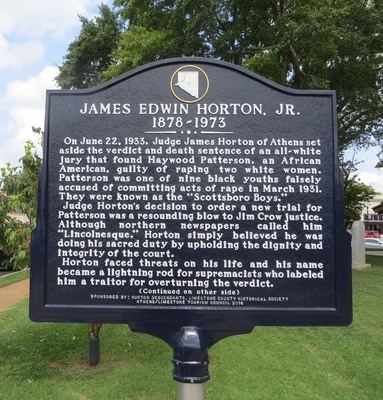 The marker reads: "JAMES EDWIN HORTON, JR. 1878-1973 -- On June 22, 1933, Judge James Horton of Athens set aside the verdict and death sentence of an all-white jury that found Haywood Patterson, an African American, guilty of raping two white women. Patterson was one of nine black youths falsely accused of committing acts of rape in March 1931. They were known as the "Scottsboro Boys." Judge Horton's decision to order a new trial for Patterson was a resounding blow to Jim Crow justice. Although northern newspapers called him "Lincolnesque," Horton simply believed he was doing his sacred duty by upholding the dignity and integrity of the court. Horton faced threats on his life and his name became a lightning rod for supremacists who labeled him a traitor for overturning the verdict. (Continued on other side) SPONSORED BY: HORTON DESCENDANTS, LIMESTONE COUNTY HISTORICAL SOCIETY ATHENS/LIMESTONE TOURISM COUNCIL 2016". State of Alabama emblem at the stop of the sign. Latitude: 31.8770972