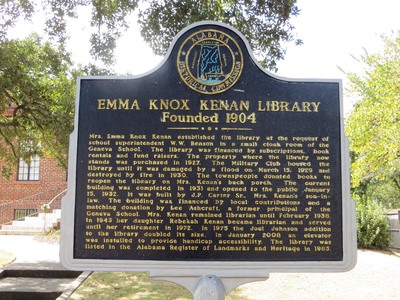 The text on the marker reads: "EMMA KNOX KENAN LIBRARY -- Founded 1904 Mrs. Emma Knox Kenan established the library at the request of school superintendent W.W. Benson in a small cloak room of the Geneva School. The library was financed by subscriptions, book rentals and fund raisers. The property where the library now stands was purchased in 1927. The Military Club housed the library until it was damaged by a flood on March 15, 1929 and destroyed by fire in 1930. The townspeople donated books to reopen the library on Mrs. Kenan’s back porch. The current building was completed in 1931 and opened to the public January 15, 1932. It was built by J.P. Carter Sr., Mrs. Kenan's son-in-law. The building was financed by local contributions and a matching donation by Lee Ashcraft, a former principal of the Geneva School. Mrs. Kenan remained librarian until February 1938. In 1943 her daughter Rebekah Kenan became librarian and served until her retirement in 1972. In 1975 the Joel Johnson addition to the library doubled its size. In January 2008 an elevator was installed to provide handicap accessibility. The library was listed in the Alabama Register of Landmarks and Heritage in 1985.". Alabama Historical Commission emblem on top of the sign.