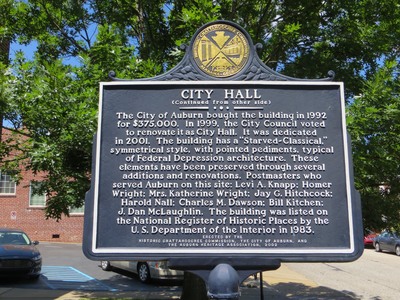 The marker reads: "CITY HALL (Continued from other side) The City of Auburn bought the building in 1992 for $375,000. In 1999, the City Council voted to renovate it as City Hall. It was dedicated in 2001. The building has a "Starved-Classical," symmetrical style, with pointed pediments, typical of Federal Depression architecture. These elements have been preserved through several additions and renovations. Postmasters who served Auburn on this site: Levi A. Knapp; Homer Wright; Mrs. Katherine Wright; Jay G. Hitchcock; Harold Nall; Charles M. Dawson; Bill Kitchen; J. Dan McLaughlin. The building was listed on the National Register of Historic Places by the U.S. Department of the Interior in 1983. ERECTED BY THE HISTORIC CHATTAHOOCHEE COMMISSION, THE CITY OF AUBURN, AND THE AUBURN HERITAGE ASSOCIATION, 2002". Historic Chattahoochee Commission Alabama-Georgia emblem at the top of the sign.