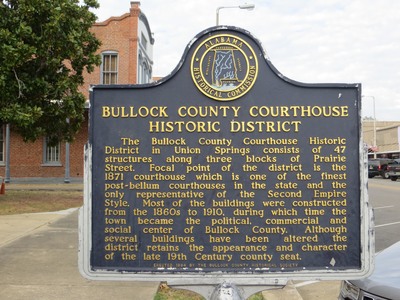 The marker reads: "BULLOCK COUNTY COURTHOUSE HISTORIC DISTRICT The Bullock County Courthouse Historic District in Union Springs consists of 47 structures along three blocks of Prairie Street. Focal point of the district is the 1871 courthouse which is one of the finest post-bellum courthouses in the state and the only representative of the Second Empire Style. Most of the buildings were constructed from the 1860s to 1910, during which time the town became the political, commercial and social center of Bullock County. Although several buildings have been altered the district retains the appearance and character of the late 19th Century county seat. ERECTED 1984 BY THE BULLOCK COUNTY HISTORICAL SOCIETY" Image of Alabama Historical Commission seal at the top of sign