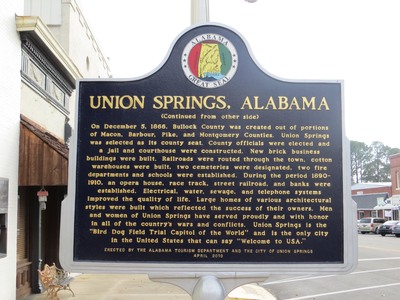 The marker reads: "UNION SPRINGS, ALABAMA (Continued from other side) On December 5, 1866, Bullock County was created out of portions of Macon, Barbour, Pike, and Montgomery Counties. Union Springs was selected as its county seat. County officials were elected and a jail and courthouse were constructed. New brick business buildings were built. Railroads were routed through the town, cotton warehouses were built, two cemeteries were designated, two fire departments and schools were established. During the period 1890-1910, an opera house, race track, street railroad, and banks were established. Electrical, water, sewage, and telephone systems improved the quality of life. Large homes of various architectural styles were built which reflected the success of their owners. Men and women of Union Springs have served proudly and with honor in all of the country’s wars and conflicts. Union Springs is the “Bird Dog Field Trial Capitol of the World” and is the only city in the United States that can say “Welcome to USA.” ERECTED BY THE ALABAMA TOURISM DEPARTMENT AND THE CITY OF UNION SPRINGS APRIL 2010". Top of the sign: Image of Alabama Great Seal.