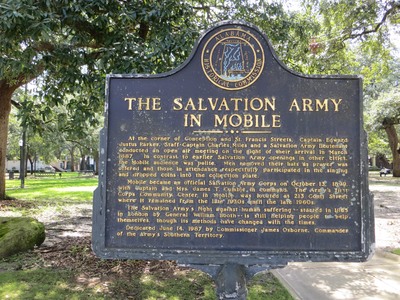 The marker reads: "THE SALVATION ARMY IN MOBILE -- At the corner of Conception and St. Francis Streets, Captain Edward Justus Parker, Staff-Captain Charles Miles and a Salvation Army lieutenant conducted an open air meeting on the night of their arrival in March 1887. In contrast to earlier Salvation Army openings in other cities, the Mobile audience was polite. Men removed their hats as prayer was offered and those in attendance respectfully participated in singing and dropped coins into the collection plate. Mobile became an official Salvation Army Corps on October 13, 1899, with Captain and Mrs. James T. Cumbie in command. The Army's first Corps Community Center in Mobile was located at 213 Conti Street where it remained from the late 1930s to the late 1960s. The Salvation Army's fight against human suffering -- started in 1865 in London by General William Booth -- is still helping people to help themselves, though its methods have changed with the times.". Top of the sign: Alabama Historical Commission emblem.