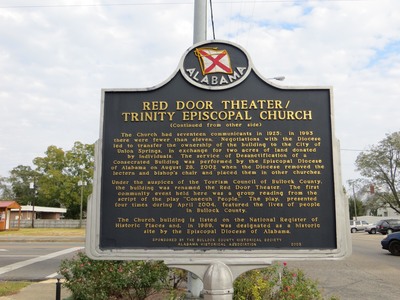 The marker reads: "RED DOOR THEATER / TRINITY EPISCOPAL CHURCH (Continued from other side) The Church had seventeen communicants in 1925; in 1993 there were fewer than eleven. Negotiations with the Diocese led to transfer of ownership of the building to the City of Union Springs, in exchange for two acres of land donated by individuals. The service of Desanctification of a Consecrated Building was performed by the Episcopal Diocese of Alabama on August 28, 2002 when the Diocese removed the lectern and bishop’s chair and placed them in other churches. Under the auspices of the Tourism Council of Bullock County, the building was renamed the Red Door Theater. The first community event held here was a group reading from the script of the play “Conecuh People.” The play, presented four times during April 2004, featured the lives of people in Bullock County. The church building is listed on the National Register of Historic Places and, in 1989, was designated as a historic site by the Episcopal Diocese of Alabama. SPONSORED BY THE BULLOCK COUNTY HISTORICAL SOCIETY ALABAMA HISTORICAL ASSOCIATION 2005". Top of sign: Image of Alabama state flag.