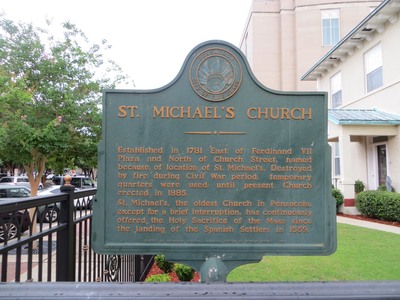 The marker reads: "ST. MICHAEL'S CHURCH -- Established in 1781 East of Ferdinand VII Plaza and North of Church Street, named because of location of St. Michael's. Destroyed by fire during Civil War period, temporary quarters were used until present Church erected in 1885. St. Michael’s, the oldest Church in Pensacola, except for a brief interruption, has continuously offered the Holy Sacrifice of the Mass since the Landing of the Spanish Settlers in 1559. ERECTED BY PENSACOLA DEABERY - NATIONAL COUNCIL OF CATHOLIC WOMEN 1956" Top of sign: Pensacola City of five Flags emblem