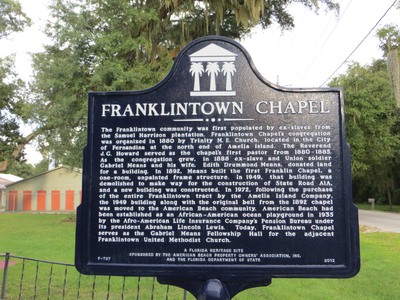 The marker reads: "FRANKLINTOWN CHAPEL The Franklintown community was first populated by ex-slaves from the Samuel Harrison plantation. Franklintown Chapel's congregation was organized in 1880 by Trinity M.E. Church, located in the City of Fernandina at the north end of Amelia Island. The Reverend J.G. Howard served as the chapel's first pastor from 1880-1885. As the congregation grew, in 1888 ex-slave and Union soldier Gabriel Means and his wife, Edith Drummond Means, donated land for a building. In 1892, Means built the first Franklin Chapel, a one-room, unpainted frame structure. In 1949, that building was demolished to make way for the construction of State Road A1A, and a new building was constructed. In 1972, following the purchase of the entire Franklintown tract by the Amelia Island Company, the 1949 building along with the original bell from the 1892 chapel was moved to the American Beach community. American Beach had been established as an African-American ocean playground in 1935 by the Afro-American Life Insurance Company's Pension Bureau under its president Abraham Lincoln Lewis. Today, Franklintown Chapel serves as the Gabriel Lincoln Means Fellowship Hall for the adjacent Franklintown United Methodist Church. F-737 A FLORIDA HERITAGE SITE SPONSORED BY THE AMERICAN BEACH PROPERTY OWNERS' ASSOCIATION, INC. AND THE FLORIDA DEPARTMENT OF STATE 2012" Top of sign: Florida Heritage emblem