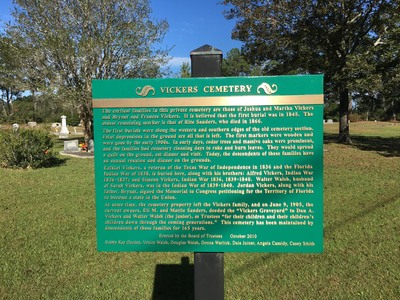 The marker reads: "VICKERS CEMETERY The earliest families in this private cemetery are those of Joshua and Martha Vickers and Bryant and Frances Vickers. It is believed that the first burial was in 1845. The oldest remaining marker is that of Rite Sanders, who died in 1866.

The first burials were along the western and southern edges of the old cemetery section. Faint depressions in the ground are all that is left. The first markers were wooden and were gone by the early 1900s. In early days, cedar trees and massive oaks were prominent and the families had cemetery cleaning days to rake and burn leaves. They would spread a quilt on the ground, eat dinner and visit. Today, the descendants of these families have an annual reunion and dinner on the grounds.

Ezekiel Vickers, a veteran of the Texas War of Independence in 1836 and the Florida Indian War of 1838, is buried here, along with his brothers: Alfred Vickers, Indian War 1836-37; and Simeon Vickers, Indian War 1836, 1839-1840. Walter Walsh, husband of Sarah Vickers, was in the Indian War of 1839-1840. Jordan Vickers, along with his father, Bryant, signed the Memorial to Congress petitioning for the Territory of Florida to become a state in the Union. At some time, the cemetery property left the Vickers family, and on June 9, 1905, the current owners, Eli M. and Mattie Sanders, deeded the "Vickers Graveyard" to Don A. Vickers and Walter Walsh (the junior), as Trustees "for their children and their children's children down through the coming generations." This cemetery has been maintained by descendants of these families for 165 years. Erected by the Board of Trustees October 2010 Bobby Ray Durden, Venice Walsh, Douglas Walsh, Donna Warlick, Dale Joiner, Angela Cassidy, Casey Smith"