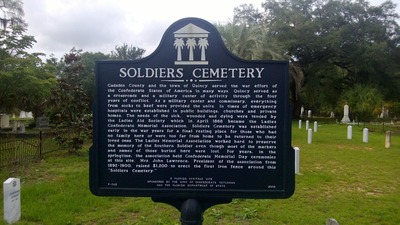 The marker reads: "SOLDIERS CEMETERY Gadsden County and the town of Quincy served the war effort of the Confederate States of America in many ways. Quincy served as a crossroads and a military center of activity through the four years of conflict. As a military center and commissary, everything from socks to beef were provided the units. In times of emergency hospitals were established in public buildings, churches and private homes. The needs of the sick, wounded and dying were tended by the Ladies Aid Society which in April 1868 became the Ladies Confederate Memorial Association. Soldiers Cemetery was established early in the war years for a final resting place for those who had no family here or were too far from home to be returned to their loved ones. The Ladies Memorial Association worked hard to preserve the memory of the Southern Soldier even though most of the markers and names of those buried here were lost. For years, in the springtime, the association held Confederate Memorial Day ceremonies at this site. Mrs. John Lawrence, President of the association from 1892-1900, raised $1,200 to erect the first iron fence around this Soldiers Cemetery. F-582 A FLORIDA HERITAGE SITE SPONSORED BY THE SONS OF CONFEDERATE VETERANS AND THE FLORIDA DEPARTMENT OF STATE 2006". Top of sign: Florida Heritage emblem