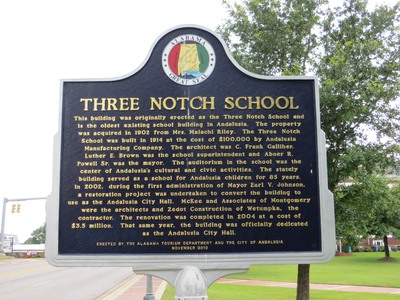 The marker reads: "THREE NOTCH SCHOOL This building was originally erected as the Three Notch School and is the oldest existing school building in Andalusia. The property was acquired in 1902 from Mrs. Malachi Riley. The Three Notch School was built in 1914 at the cost of $100,000 by Andalusia Manufacturing Company. The architect was C. Frank Galliher. Luther E. Brown was the school superintendent and Abner R. Powell Sr. was the mayor. The auditorium in the school was the center of Andalusia's cultural and civic activities. The stately building served as a school for Andalusia children for 85 years. In 2002, during the first administration of Mayor Earl V. Johnson, a restoration project was undertaken to convert the building to use as the Andalusia City Hall. McKee and Associates of Montgomery were the architects and Zedot Construction of Wetumpka, the contractor. The renovation was completed in 2004 at a cost of $3.5 million. That same year, the building was officially dedicated as the Andalusia City Hall. ERECTED BY THE ALABAMA TOURISM DEPARTMENT AND THE CITY OF ANDALUSIA NOVEMBER 2010" Top of the sign: Image of Alabama Great Seal.