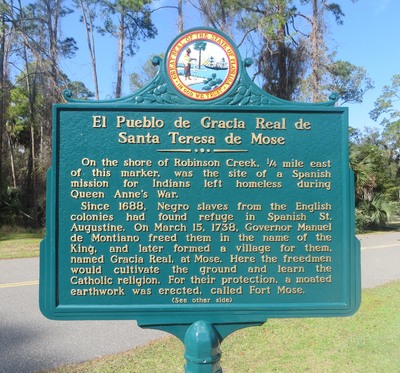 The marker reads: "El Pueblo de Gracia Real de Santa Teresa de Mose On the shore of Robinson Creek, ¼ mile east of this marker, was the site of a Spanish mission for Indians left homeless during Queen Anne's War. Since 1688, Negro slaves from the English colonies had found refuge in Spanish St. Augustine. On March 15, 1738, Governor Manuel de Montiano freed them in the name of the King, and later formed a village for them named Gracia Real, at Mose. Here the freedmen would cultivate the ground and learn the Catholic religion. For their protection, a moated earthwork was erected, called Fort Mose. (See other side)" Top of the sign: Image of the Great Seal of the State of Florida – In God We Trust