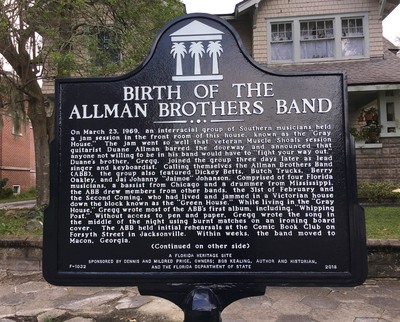 The marker reads: "BIRTH OF THE ALLMAN BROTHERS BAND On March 23, 1969, an interracial group of Southern musicians held a jam session in the front room of this house, known as the "Gray House." The jam went so well that veteran Muscle Shoals session guitarist Duane Allman barred the doorway and announced that anyone not willing to be in his band would have to "fight your way out." Duane's brother, Gregg, joined the group three days later as lead singer and keyboardist. Calling themselves the Allman Brothers Band (ABB), the group also featured Dickey Betts, Butch Trucks, Berry Oakley, and Jai Johanny "Jaimoe" Johanson. Comprised of four Florida musicians, a bassist from Chicago and a drummer from Mississippi, the ABB drew members from other bands, the 31st of February and the Second Coming, who had lived and jammed in a Victorian house down the block known as the "Green House." While living in the "Gray House," Gregg wrote most of the ABB's first album, including, "Whipping Post." Without access to pen and paper, Gregg wrote the song in the middle of the night using burnt matches on an ironing board cover. The ABB held initial rehearsals at the Comic Book Club on Forsyth Street in Jacksonville. Within weeks, the band moved to Macon, Georgia. (Continued on other side) F-1032 A FLORIDA HERITAGE SITE SPONSORED BY DENNIS AND MILDRED PRICE, OWNERS; BOB KEALING, AUTHOR AND HISTORIAN, AND THE FLORIDA DEPARTMENT OF STATE 2018" Top of sign: Florida Heritage emblem