Attempt on the Life of Jose Marti Marker, Tampa, FL 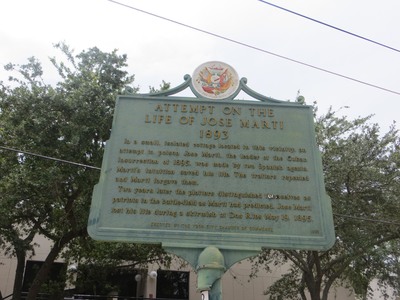 The marker reads: "ATTEMPT ON THE LIFE OF JOSE MARTI 1893 In a small isolated cottage located in this vicinity, an attempt to poison Jose Marti, the leader of the Cuban Insurrection of 1895, was made by two Spanish agents. Marti's intuition saved his life. The traitors repented and Marti forgave them.

Two years later the plotters distinguished themselves as patriots in the battle-field as Marti had predicted. Jose Marti lost his life during the skirmish at Dos Rios May 19, 1895. ERECTED BY THE YBOR CITY CHAMBER OF COMMERCE 1962"