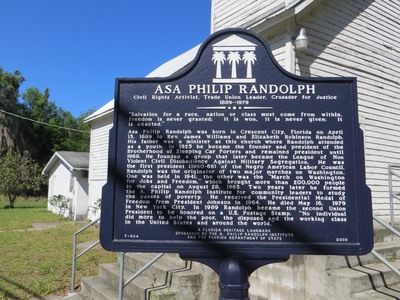 The marker reads: "ASA PHILIP RANDOLPH -- Civic Rights Activist, Trade Union Leader, Crusader for Justice 1889–1979 “Salvation for a race, nation or class must come from within. Freedom is never granted; it is won. Justice is never given; it is exacted.”

Asa Philip Randolph was born in Crescent City, Florida on April 15, 1889 to Rev. James Williams and Elizabeth Robinson Randolph. His father was a minister at this church where Randolph attended as a youth. In 1925 he became the founder and president of the Brotherhood of Sleeping Car Porters and remained president until 1968. He founded a group that later became the League of Non Violent Civil Disobedience Against Military Segregation. He was the first president (1960–66) of the Negro American Labor Council. Randolph was the originator of two major marches on Washington. One was held in 1941; the other was the March on Washington for Jobs and Freedom, which brought more than 200,000 people to the capital on August 28, 1963. Two years later he formed the A. Philip Randolph Institute for community leaders to study the causes of poverty. He received the Presidential Medal of Freedom from President Johnson in 1964. He died May 16, 1979 in New York City. In 1989 Randolph became the second Union President to be honored on a U. S. postage stamp. “No individual did more to help the poor, the disposed and the working class in the United States and around the world. F-564 A FLORIDA HERITAGE LANDMARK SPONSORED BY THE A. PHILIP RANDOLPH INSTITUTE AND THE FLORIDA DEPARTMENT OF STATE 2005" Top of sign: Florida Heritage emblem