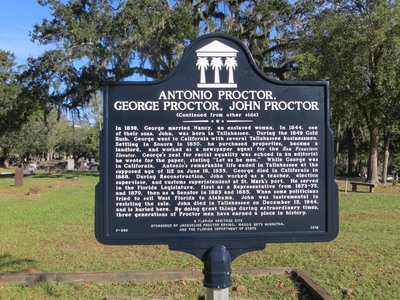 The marker reads: "ANTONIO PROCTOR, GEORGE PROCTOR, JOHN PROCTOR (Continued from other side) In 1839, George married Nancy, an enslaved woman. In 1844, one of their sons, John, was born in Tallahassee. During the 1849 Gold Rush, George went to California with several Tallahassee businessmen. Settling in Sonora in 1850, he purchased properties, became a landlord, and worked as a newspaper agent for the San Francisco Elevator. George’s zeal for racial equality was echoed in an editorial he wrote for the paper, stating “Let us be men.” While George was in California, Antonio’s remarkable life ended in Tallahassee at the supposed age of 112 on June 16, 1855. George died in California in 1868. During Reconstruction, John worked as a teacher, election supervisor, and customs superintendent at St. Mark’s port. He served in the Florida Legislature, first as a Representative from 1873-75, and 1879, then as a Senator in 1883 and 1885. When some politicians tried to sell West Florida to Alabama, John was instrumental in resisting the sale. John died in Tallahassee on December 15, 1944, and is buried here. By doing great things during extraordinary times, three generations of Proctor men have earned a place in history. F-998 A FLORIDA HERITAGE SITE SPONSORED BY JACQUELINE PROCTOR ERVING, MAGGIE BETH MCGROTHA, AND THE FLORIDA DEPARTMENT OF STATE 2018" Top of sign: Florida Heritage emblem