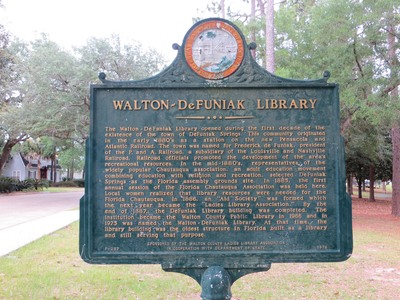 The marker reads: "WALTON-DeFUNIAK LIBRARY -- The Walton-DeFuniak Library opened during the first decade of the existence of the town of DeFuniak Springs. This community originated in the early 1880's as a station on the new Pensacola and Atlantic Railroad. The town was named for Frederick de Funiak, president of the P. and A. Railroad, a subsidiary of the Louisville and Nashville Railroad. Railroad officials promoted the development of the area's recreational resources. In the mid-1880's, representatives of the widely popular Chautauqua association, an adult education movement combining education with religion and recreation, selected DeFuniak Springs was the Florida assembly grounds site. In 1885, the first annual session of the Florida Chautauqua Association was held here. Local women realized that library resources were needed for the Florida Chautauqua. In 1886, an "Aid Society" was formed which the next year became the "Ladies Library Association." By the end of 1887, the DeFuniak Library building was completed. The Institution became the Walton County Public Library in 1966 and in 1975 was named the Walton-DeFuniak Library. At that time, the library building was the oldest structure in Florida built as a library and still serving that purpose. F-267 SPONSORED BY THE WALTON COUNTY LADIES LIBRARY ASSOCIATION IN COOPERATION WITH DEPARTMENT OF STATE 1976" Top of the sign: Image of the Great Seal of the State of Florida – In God We Trust