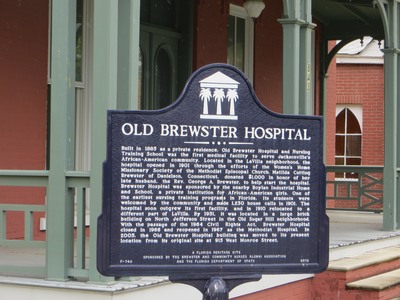 The marker reads: "OLD BREWSTER HOSPITAL -- Built in 1885 as a private residence, Old Brewster Hospital and Nursing Training School was the first medical facility to serve Jacksonville’s African-American community. Located in the LaVilla neighborhood, the hospital opened in 1901 through the efforts of the Women’s Home Missionary Society of the Methodist Episcopal Church. Matilda Cutting Brewster of Danielson, Connecticut, donated $1,000 in honor of her late husband, the Rev. George A. Brewster, to help start the hospital. Brewster Hospital was sponsored by the nearby Boylan Industrial Home and School, a private institution for African-American girls. One of the earliest nursing training programs in Florida, its students were welcomed by the community and made 1,230 house calls in 1901. The hospital soon outgrew its first facility, and in 1910 relocated to a different part of LaVilla. By 1931, it was located in a large brick building on North Jefferson Street in the Old Sugar Hill neighborhood. With the passage of the 1964 Civil Rights Act, Brewster Hospital closed in 1966 and reopened in 1967 as the Methodist Hospital. In 2005, the Old Brewster Hospital building was moved to its present location from its original site at 915 West Monroe Street. F-742 A FLORIDA HERITAGE SITE SPONSORED BY THE BREWSTER AND COMMUNITY NURSES ALUMNI ASSOCIATION AND THE FLORIDA DEPARTMENT OF STATE 2012" Top of sign: Florida Heritage emblem