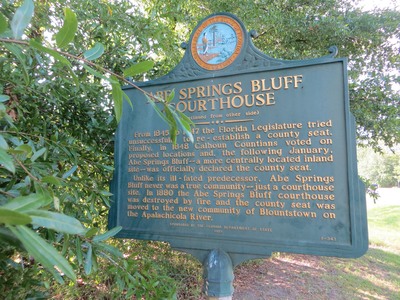 The marker reads: "ABE SPRINGS BLUFF COURTHOUSE -- (Continued from other side) From 1845 to 1847 the Florida Legislature tried unsuccessful to re-establish a county seat. Finally, in 1848 Calhoun Countians voted on proposed locations and, the following January, Abe Springs Bluff -- a more centrally located inland site -- was officially declared the county seat. Unlike its ill-fated predecessor, Abe Springs Bluff never was a true community -- just a courthouse site. In 1880 the Abe Springs Bluff courthouse was destroyed by fire and the county seat was moved to the new community of Blountstown on the Apalachicola River. SPONSORED BY THE FLORIDA DEPARTMENT OF STATE 1993 F-347" Top of the sign: Image of the Great Seal of the State of Florida – In God We Trust