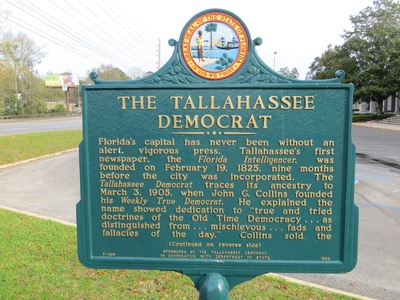 The marker reads: "THE TALLAHASSEE DEMOCRAT - Florida's capital has never been without an alert, vigorous press. Tallahassee's first newspaper, the Florida Intelligencer, was founded on February 19, 1825, nine months before the city was incorporated. The Tallahassee Democrat traces its ancestry to March 3, 1905, when John G. Collins founded his Weekly True Democrat. He explained the name showed dedication to "true and tried doctrines of the Old Time Democracy...as distinguished from...mischievous...fads and fallacies of the day." Collins sold the (Continued on reverse side) F-298 SPONSORED BY THE TALLAHASSEE DEMOCRAT IN COOPERATION WITH DEPARTMENT OF STATE 1982" Top of the sign: Image of the Great Seal of the State of Florida – In God We Trust