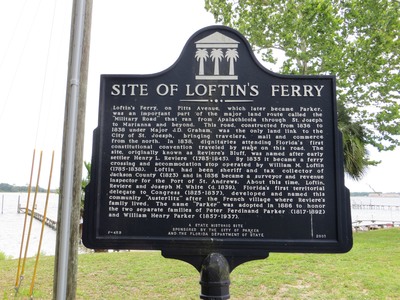 The marker reads: "SITE OF LOFTIN'S FERRY Loftin’s Ferry, on Pitts Avenue, which later became Parker, was an important part of the major land route called the “Military Road” that ran from Apalachicola through St. Joseph to Marianna and beyond. This road, constructed from 1836 to 1838 under Major J.D. Graham, was the only land link to the City of St. Joseph, bringing travelers, mail and commerce from the north. In 1838, dignitaries attending Florida’s first constitutional convention traveled by stage on this road. The site, originally known as Reviere’s Bluff, was named after early settler Henry L. Reviere (1785-1845). By 1835 it became a ferry crossing and accommodation stop operated by William M. Loftin (1785-1838). Loftin had been sheriff and tax collector of Jackson County (1823) and in 1836 became a surveyor and revenue inspector for the Port of St. Andrews. About this time, Loftin, Reviere and Joseph M. White (d. 1839), Florida's first territorial delegate to Congress (1825-1837), developed and named this community “Austerlitz” after the French village where Reviere’s family lived. The name “Parker” was adopted in 1886 to honor the two separate families of Peter Ferdinand Parker (1817-1892) and William Henry Parker (1857-1937). F-459 A STATE HISTORIC SITE SPONSORED BY THE CITY OF PARKER AND THE FLORIDA DEPARTMENT OF STATE 2001" Top of sign: Florida Heritage emblem