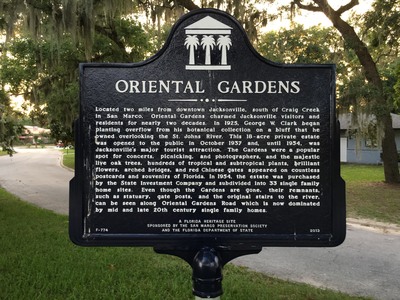 The marker reads: "ORIENTAL GARDENS Located two miles from downtown Jacksonville, south of Craig Creek in San Marco, Oriental Gardens charmed Jacksonville visitors and residents for nearly two decades. In 1925, George W. Clark began planting overflow from his botanical collection on a bluff that he owned overlooking the St. Johns River. This 18-acre private estate was opened to the public in October 1937 and, until 1954, was Jacksonville's major tourist attraction. The Gardens were a popular spot for concerts, picnicking, and photographers, and the majestic live oak trees, hundreds of tropical and subtropical plants, brilliant flowers, arched bridges, and red Chinese gates appeared on countless postcards and souvenirs of Florida. In 1954, the estate was purchased by the State Investment Company and subdivided into 33 single family home sites. Even though the Gardens are gone, their remnants, such as statuary, gate posts, and original stairs to the river, can be seen along Oriental Gardens Road which is now dominated by mid and late 20th century single family homes. F-774 A FLORIDA HERITAGE SITE SPONSORED BY THE SAN MARCO PRESERVATION SOCIETY AND THE FLORIDA DEPARTMENT OF STATE 2013" Top of sign: Florida Heritage emblem