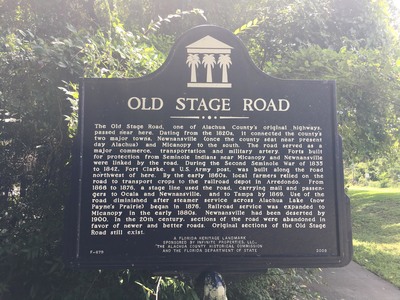 The marker reads: "OLD STAGE ROAD The Old Stage Road, one of Alachua County’s original highways, passed near here. Dating from the 1820s, it connected the county’s two major towns, Newnansville (once the county seat near present day Alachua) and Micanopy to the south. The road served as a major commerce, transportation and military artery. Forts built for protection from Seminole Indians near Micanopy and Newnansville were linked by the road. During the Second Seminole War of 1835 to 1842, Fort Clarke, a U.S. Army post, was built along the road northwest of here. By the early 1860s, local farmers relied on the road to transport crops to the railroad depot in Arredondo. From 1866 to 1876, a stage line used the road, carrying mail and passengers to Ocala and Newnansville, and to Tampa by 1869. Use of the road diminished after steamer service across Alachua Lake (now Payne’s Prairie) began in 1876. Railroad service was expanded to Micanopy in the early 1880s. Newnansville had been deserted by 1900. In the 20th century, sections of the road were abandoned in favor of newer and better roads. Original sections of the Old Stage Road still exist. F-679 A FLORIDA HERITAGE LANDMARK SPONSORED BY INFINITE PROPERTIES, LLC., THE ALACHUA COUNTY HISTORICAL COMMISSION AND THE FLORIDA DEPARTMENT OF STATE 2009" Top of sign: Florida Heritage emblem