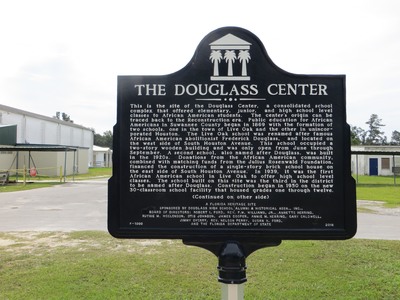 The marker reads: "THE DOUGLASS CENTER. This is the site of the Douglass Center, a consolidated school complex that offered elementary, junior, and high school level classes to African American students. The center's origin can be traced back to the Reconstruction era. Public education for African Americans in Suwannee County began in 1869 with the formation of two schools, one in the town of Live Oak and the other in unincorporated Houston. The Live Oak school was renamed after famous African American abolitionist Frederick Douglass, and located on the west side of South Houston Avenue. This school occupied a two-story wooden building and was only open from June through September. A second school, also named after Douglass, was built in the 1920s. Donations from the African American community, combined with matching funds from the Julius Rosenwald Foundation, financed the construction of a single-story brick school house on the east side of South Houston Avenue. In 1939, it was the first African American school in Live Oak to offer high school level classes. The school built on this site was the third in the district named after Douglass. Construction began in 1950 on the new 30-classroom school facility that housed grades one through twelve. (Continued on other side) F-1000 A FLORIDA HERITAGE SITE SPONSORED BY DOUGLASS HIGH SCHOOL ALUMNI & HISTORICAL ASSN., INC., BOARD OF DIRECTORS: ROBERT I. FORD, REV. F.W. WILLIAMS, JR., ANNETTE HERRING, RUTHIE M. MCCLENDON, OTIS JOHNSON, JAMES COOPER, ANNIE M. HERRING, GARY CALDWELL, JIMMY CHERRY, REV. NELSON PERRY, SUSAN H. FORD, AND THE FLORIDA DEPARTMENT OF STATE 2018" Top of sign: Florida Heritage emblem