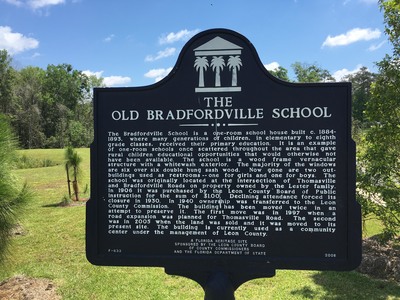 The marker reads: "THE OLD BRADFORDVILLE SCHOOL The Bradfordville School is a one-room school house built c. 1884-1893, where many generations of children, in elementary to eighth grade classes, received their primary education. It is an example of one-room schools once scattered throughout the area that gave rural children educational opportunities that would otherwise not have been available. The school is a wood frame vernacular structure with a whitewash exterior. The majority of the windows are six over six double hung sash wood. Now gone are two outbuildings used as restroom--one for girls and one for boys. The school was originally located at the intersection of Thomasville and Bradfordville Roads on property owned by the Lester family. In 1906 it was purchased by the Leon County Board of Public Instruction for the sum of $1.00. Declining attendance forced its closure in 1930. In 1940 ownership was transferred to the Leon County Commission. The building has been moved twice in an attempt to preserve it. The first move was in 1997 when a road expansion was planned for Thomasville Road. The second was in 2005 when the land was sold and it was moved to its present site. The building is currently used as a community center under the management of Leon County. F-633 A FLORIDA HERITAGE SITE SPONSORED BY THE LEON COUNTY BOARD OF COUNTY COMMISSIONERS AND THE FLORIDA DEPARTMENT OF STATE 2008" Top of sign: Florida Heritage emblem