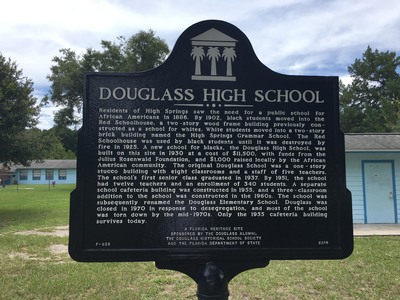 The marker reads: "DOUGLASS HIGH SCHOOL -- Residents of High Springs saw the need for a public school for African Americans in 1886. By 1902, black students moved into the Red Schoolhouse, a two-story wood frame building previously constructed as a school for whites. White students moved into a two-story brick building named the High Springs Grammar School. The Red Schoolhouse was used by black students until it was destroyed by fire in 1925. A new school for blacks, the Douglass High School, was built on this site in 1930 at a cost of $11,500, with funds from the Julius Rosenwald Foundation, and $1,000 raised locally by the African American community. The original Douglass School was a one-story stucco building with eight classrooms and a staff of five teachers. The school’s first senior class graduated in 1937. By 1951, the school had twelve teachers and an enrollment of 340 students. A separate school cafeteria building was constructed in 1955, and a three-classroom addition to the school was constructed in the 1960s. The school was subsequently renamed the Douglass Elementary School. Douglass was closed in 1970 in response to desegregation, and most of the school was torn down by the mid-1970s. Only the 1955 cafeteria building survives today. F-835 A FLORIDA HERITAGE SITE SPONSORED BY THE DOUGLASS ALUMNI, THE DOUGLASS HISTORICAL SCHOOL SOCIETY AND THE FLORIDA DEPARTMENT OF STATE 2014" Top of sign: Florida Heritage emblem