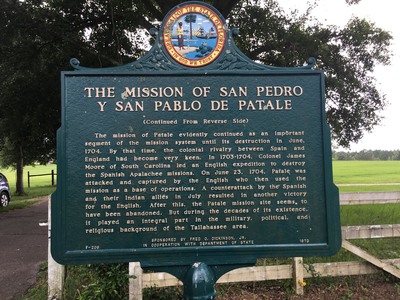 The marker reads: "THE MISSION OF SAN PEDRO Y SAN PABLO DE PATALE (Continued From Reverse Side)The mission of Patale evidently continued as an important segment of the mission system until its destruction in June, 1704. By that time, the colonial rivalry between Spain and England had become very keen. In 1703-1704, Colonel James Moore of South Carolina led an English expedition to destroy the Spanish Apalachee missions. On June 23, 1704, Patale was attacked and captured by the English who then used the mission as a base of operations. A counterattack by the Spanish and their Indian allies in July resulted in another victory for the English. After this, the Patale mission site seems to have been abandoned. But during the decades of its existence, it played an integral part in the military, political, and religious background of the Tallahassee area. F-209 SPONSORED BY FRED O. DICKINSON, JR. IN COOPERATION WITH DEPARTMENT OF STATE 1973" Top of the sign: Image of the Great Seal of the State of Florida – In God We Trust