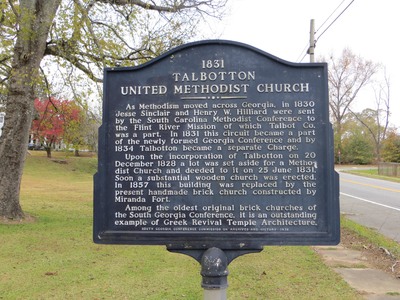 The marker reads: "1831 TALBOTTON UNITED METHODIST CHURCH As Methodism moved across Georgia, in 1830 Jesse Sinclair and Henry W. Hilliard were sent by the South Carolina Methodist Conference to the Flint River Mission of which Talbot Co. was a part. In 1831 this circuit became a part of the newly formed Georgia Conference and by 1834 Talbotton became a separate Charge. Upon the incorporation of Talbotton on 20 December 1828 a lot was set aside for a Methodist Church and deeded to it on 25 June 1831. Soon a substantial wooden church was erected. In 1857 this building was replaced by the present handmade brick church constructed by Miranda Fort. Among the oldest original brick churches of the South Georgia Conference, it is an outstanding example of Greek Revival Temple Architecture. SOUTH GEORGIA CONFERENCE COMMISSION ON ARCHIVES AND HISTORY 1978"