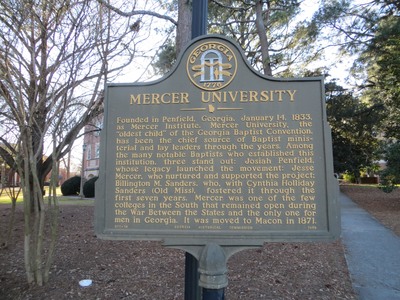 The marker reads: "MERCER UNIVERSITY Founded in Penfield, Georgia, January 14, 1833, as Mercer Institute, Mercer University, the “oldest child” of the Georgia Baptist Convention, has been the chief source of Baptist ministerial and lay leaders through the years. Among the many notable Baptists who established this institution, three stand out: Josiah Penfield, whose legacy launched the movement; Jesse Mercer, who nurtured and supported the project; Billington M. Sanders, who, with Cynthia Holliday Sanders (Old Miss), fostered it through the first seven years. Mercer was one of the few colleges in the South that remained open during the War Between the States and the only one for men in Georgia. It was moved to Macon in 1871. 011-18 GEORGIA HISTORICAL COMMISSION 1959" Top of sign: The Great Seal of Georgia – Georgia 1776 Constitution Justice Wisdom Moderation