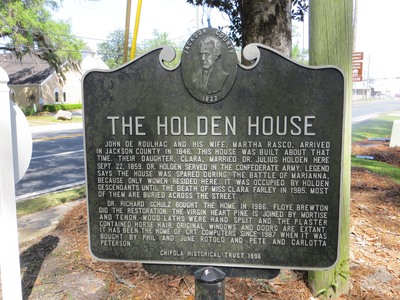 The marker reads: “THE HOLDEN HOUSE John De Roulhac and his wife, Martha Rasco, arrived in Jackson County in 1846. This house was built about that time. Their daughter, Clara, married Dr. Julius Holden here Sept. 22, 1859. Dr. Holden served in the Confederate Army. Legend says the house was spared during The Battle of Marianna, because only women resided here. It was occupied by Holden descendants until the death of Miss Clara Farley in 1985. Most of them are buried across the street. Dr. Richard Schultz bought the home in 1986. Floye Brewton did the restoration. The Virgin Heart Pine is joined by mortise and tenon. Wood laths were hand split and the plaster contained horse hair. Original windows and doors are extant. It has been the home of CRT Computers since 1987 when it was bought by Phil and June Rotolo and Pete and Carlotta Peterson. Chipola Historical Trust 1996” Top of sign: Jackson County 1822, Andrew Jackson emblem