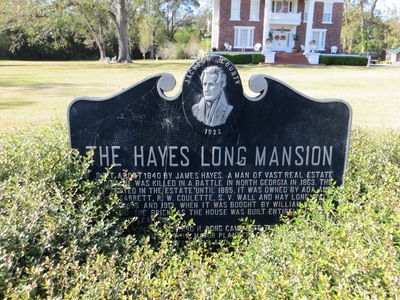 The marker reads: “THE HAYES LONG MANSION Built about 1840 by James Hayes, a man of cast real estate holdings. He was killed in a battle in North Georgia in 1863. The house stayed in the estate until 1885. It was owned by Ada and William Garret, R.W. Coulette, S.V. Wall and Hay Long Wall between 1885 and 1913, when it was bought by William H. Long who added brick, as the house was built entirely of the native Long Leaf Pine. Longs ancestor Richard H. Long came into this area around 1820 and was one of the major planters. He was active in Indian and community affairs and was one of the signers of the Florida Constitution. In 1984, William’s great great, grand daughter, Billy Hay Wall Williams, sold it. It was restored by its present owners’ Dan and Rosalind Di Michele. 1997 Chipola Historical Trust” Top of sign:Top of sign: Jackson County 1822, Andrew Jackson emblem