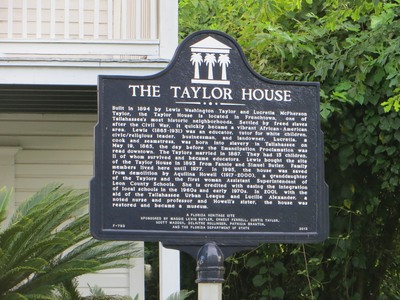 "THE TAYLOR HOUSE Built in 1894 by Lewis Washington Taylor and Lucretia McPherson Taylor, the Taylor House is located in Frenchtown, one of Tallahassee’s most historic neighborhoods. Settled by freed slaves after the Civil War, it quickly became a vibrant African-American area. Lewis (1865-1931) was an educator, tutor for white children, civic/religious leader, businessman, and landowner. Lucretia, a cook and seamstress, was born into slavery in Tallahassee on May 19, 1865, the day before the Emancipation Proclamation was read downtown. The Taylors married in 1887. They had 13 children, 11 of whom survived and became educators. Lewis bought the site of the Taylor House in 1893 from Fannie and Simuel Butler. Family members lived here until 1977. In 1995, the house was saved from demolition by Aquilina Howell (1917-2000), a granddaughter of the Taylors and the first woman Assistant Superintendent of Leon County Schools. She is credited with easing the integration of local schools in the 1960s and early 1970s. In 2001, with the aid of the Tallahassee Urban League and Lucille Alexander, a noted nurse and professor and Howell’s sister, the house was restored and became a museum. F-793 A FLORIDA HERITAGE SITE SPONSORED BY MAGGIE LEWIS BUTLER, ERNEST FERRELL, CURTIS TAYLOR, SCOTT MADDOX, DELAITRE HOLLINGER, PATRICIA BRANTON, AND THE FLORIDA DEPARTMENT OF STATE 2013"