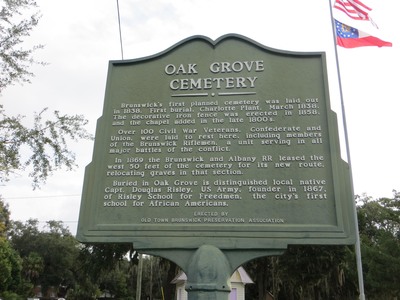 The marker reads: “OAK GROVE CEMETERY Brunswick’s first planned cemetery was laid out in 1838. First burial, Charlotte Plant, March 1838. The decorative iron fence was erected in 1858, and the chapel added in the late 1800’s. Over 100 Civil War Veterans, Confederate and Union, were laid to rest here, including members of the Brunswick Riflemen, a unit serving in all major battles of the conflict. In 1869 the Brunswick and Albany RR leased the west 50 feet of the cemetery for its new route, relocating graves in that section. Buried in Oak Grove is distinguished local native Capt. Douglas Risley, US Army, founder in 1867, of Risley School for Freedmen, the city’s first school for African Americans. ERECTED BY OLD TOWN BRUNSWICK PRESERVATION ASSOCIATION”