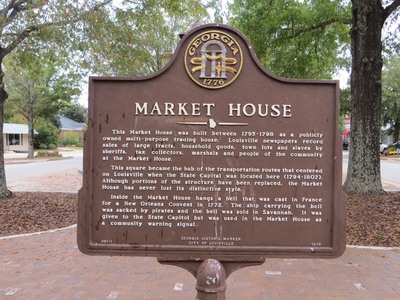 The marker reads: “MARKET HOUSE This Market House was built between 1795-1798 as a publicly owned multi-purpose trading house. Louisville newspapers record sales of large tracts, household goods, town lots and slaves by sheriffs, tax collectors, marshals and people of the community at the Market House. This square became the hub of the transportation routes that centered on Louisville when the State Capital was located here (1794-1807). Although portions of the structure have been replaced, the Market House has never lost its distinctive style. Inside the Market House hangs a bell that was cast in France for a New Orleans Convent in 1772. The ship carrying the bell was sacked by pirates and the bell was sold in Savannah. It was given to the State Capitol but was used in the Market House as a community warning signal. 081-1 GEORGIA HISTORIC MARKER CITY OF LOUISVILLE 1979” Top of sign: The Great Seal of Georgia – Georgia 1776 Constitution Justice Wisdom Moderation