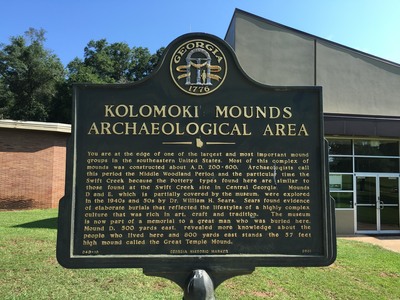 The marker reads: "KOLOMOKI MOUNDS ARCHAEOLOGICAL AREA You are at the edge of one of the largest and most important mound groups in the southeastern United States. Most of this complex of mounds was constructed about A. D. 200-600. Archaeologists call this period the Middle Woodland Period and the particular time the Swift Creek because the Pottery types found here are similar to those found at the Swift Creek site in Central Georgia. Mounds D and E, which is partially covered by the museum, were explored in the 1940s and 50s by Dr. William H. Sears. Sears found evidence of elaborate burials that reflected the lifestyles of a highly complex culture that was rich in art, craft and tradition. The museum is now part of a memorial to a great man who was buried here. Mound D. 500 yards east, revealed more knowledge about the people who lived here and 800 yards east stands the 57 feet high mound called the Great Temple Mound. 049-10 GEORGIA HISTORIC MARKER 2001" Top of sign: The Great Seal of Georgia – Georgia 1776 Constitution Justice Wisdom Moderation