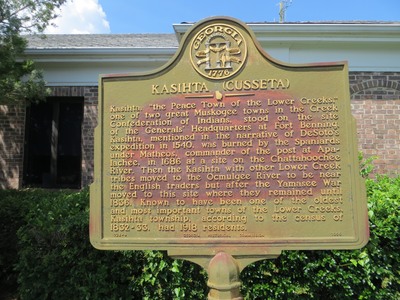 The marker reads: "KASIHTA (CUSSETA) Kasihta, “the Peace Town of the Lower Creeks,” one of two great Muskogee towns in the Creek Confederation of Indians, stood on the site of the Generals’ Headquarters at Fort Benning. Kasihta, mentioned in the narrative of DeSoto’s expedition in 1540, was burned by the Spaniards under Matheos, commander of the post at Apalachee, in 1686 at a site on the Chattahoochee River. Then the Kasihta with other Lower Creek tribes moved to the Ocmulgee River to be near the English traders but after the Yamasee War moved to this site where they remained until 1836. Known to have been one of the oldest and most important towns of the Lower Creeks, Kasihta township, according to the census of 1832-33, had 1918 residents. 026-4 GEORGIA HISTORICAL COMMISSION 1956" Top of sign: The Great Seal of Georgia – Georgia 1776 Constitution Justice Wisdom Moderation