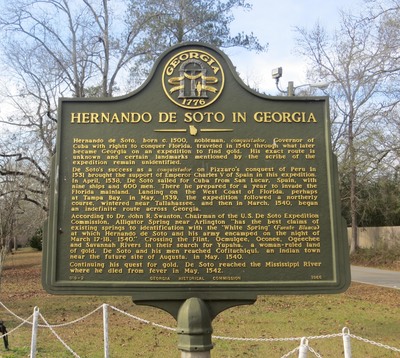 The marker reads: "HERNANDO DE SOTO IN GEORGIA Hernando de Soto, born ca. 1500, nobleman, conquistador, Governor of Cuba, with rights to conquer Florida, traveled in 1540 through what later became Georgia on an expedition to find gold. His exact route is unknown and certain landmarks mentioned by the scribe of the expedition remain unidentified. De Soto’s success as a conquistador on Pizarro’s conquest of Peru in 1531 brought the support of Emperor Charles V of Spain in this expedition. In April, 1538, De Soto sailed for Cuba from San Lucar, Spain, with nine ships and 600 men. There he prepared for a year to invade the Florida mainland. Landing on the West Coast of Florida, perhaps at Tampa Bay, in May, 1539, the expedition followed a northerly course, wintered near Tallahassee, and then in March, 1540, began an indefinite route across Georgia. According to Dr. John R. Swanton, Chairman of the U.S. De Soto Expedition Commission, Alligator Spring, near Arlington, “has the best claims of existing springs to identification with the ‘White Spring’ (Fuente Blanca) at which Hernando de Soto and his army encamped on the night of March 17-18, 1540.” Crossing the Flint, Ocmulgee, Oconee, Ogeechee and Savannah Rivers in their search for Yupaha, a woman-ruled land of gold, De Soto and his men reached Cofitachiqui, an Indian town near the future site of Augusta, in May, 1540. Continuing his quest for gold, De Soto reached the Mississippi river where he died from fever in May, 1542. 019-2 GEORGIA HISTORICAL COMMISSION 1966" Top of sign: The Great Seal of Georgia – Georgia 1776 Constitution Justice Wisdom Moderation