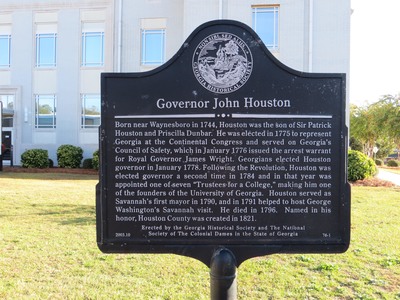 The marker reads: "Governor John Houston Born near Waynesboro in 1744, Houston was the son of Sir Patrick Houston and Priscilla Dunbar. He was elected in 1775 to represent Georgia at the Continental Congress and served on Georgia’s Council of Safety, which in January 1776 issued the arrest warrant for Royal Governor James Wright. Georgians elected Houston governor in January 1778. Following the Revolution, Houston was elected governor a second time in 1784 and in that year was appointed one of seven "Trustees for a College," making him one of the founders of the University of Georgia. Houston served as Savannah’s first mayor in 1790, and in 1791 helped to host George Washington’s Savannah visit. He died in 1796. Named in his honor, Houston County was created in 1821. 2003.10 Erected by the Georgia Historical Society and The National Society of The Colonial Dames in the State of Georgia 76-1" Top of sign: Georgia Historical Society emblem