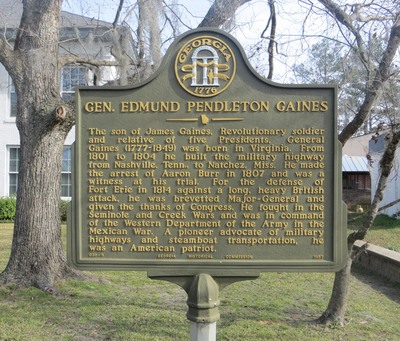 The marker reads: "GEN. EDMUND PENDLETON GAINES The son of James Gaines, Revolutionary soldier and relative of five Presidents, General Gaines (1777–1849) was born in Virginia. From 1801 to 1804 he built the military highway from Nashville, Tenn., to Natchez, Miss. He made the arrest of Aaron Burr in 1807 and was a witness at his trial. For the defense of Fort Erie in 1814 against a long, heavy British attack, he was brevetted Major-General and given the thanks of Congress. He fought in the Seminole and Creek Wars and was in command of the Western Department of the Army in the Mexican War. A pioneer advocate of military highways and steamboat transportation, he was an American patriot. 030-9 GEORGIA HISTORICAL COMMISSION 1957" Top of sign: The Great Seal of Georgia – Georgia 1776 Constitution Justice Wisdom Moderation