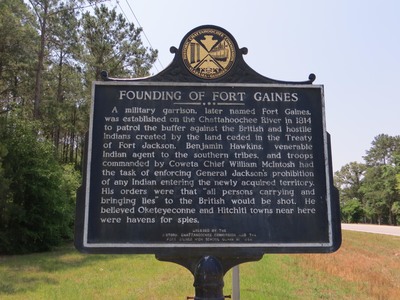 The marker reads: "FOUNDING OF FORT GAINES A military garrison, later named Fort Gaines, was established on the Chattahoochee River in 1814 to patrol the buffer against the British and hostile Indians created by the land ceded in the Treaty of Fort Jackson. Benjamin Hawkins, venerable Indian agent to the southern tribes, and troops commanded by Coweta Chief William McIntosh had the task of enforcing General Jackson’s prohibition of any Indian entering the newly acquired territory. His orders were that “all persons carrying and bringing lies” to the British would be shot. He believed Oketeyeconne and Hitchiti towns near here were havens for spies. ERECTED BY THE HISTORIC CHATTAHOOCHEE COMMISSION AND THE FORT GAINES HIGH SCHOOL CLASS OF 1939" Top of the sign: Historic Chattahoochee Commission Alabama-Georgia emblem