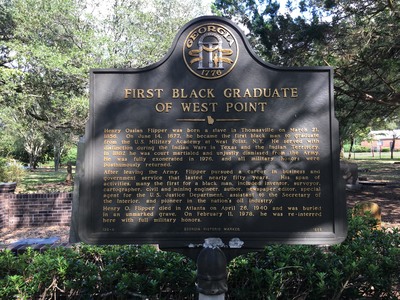 The marker reads: "FIRST BLACK GRADUATE OF WEST POINT Henry Ossian Flipper was born a slave in Thomasville on March 21, 1856. On June 14, 1877, he became the first black man to graduate from the U.S. Military Academy at West Point, N.Y. He served with distinction during the Indian Wars in Texas and the Indian Territory. In 1882 he was court martialed and unjustly dismissed from the Army. He was fully exonerated in 1976, and all military honors were posthumously returned. After leaving the Army, Flipper pursued a career in business and government service that lasted nearly fifty years. His span of activities, many the first for a black man, included inventor, surveyor, cartographer, civil and mining engineer, author, newspaper editor, special agent for the U.S. Justice Department, assistant to the Secretary of the Interior, and pioneer in the nation’s oil industry. Henry O. Flipper died in Atlanta on April 26, 1940 and was buried in an unmarked grave. On February 11, 1978, he was interred here with full military honors. 136-6 GEORGIA HISTORIC MARKER 1989" Top of sign: The Great Seal of Georgia – Georgia 1776 Constitution Justice Wisdom Moderation