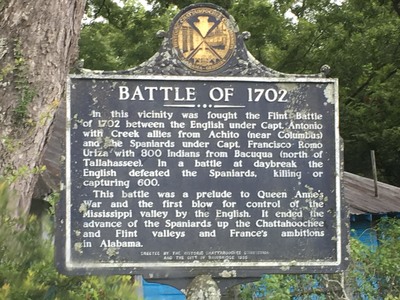 The marker reads: "BATTLE OF 1702 In this vicinity was fought the Flint Battle of 1702 between the English under Capt. Antonio with Creek allies from Achito (near Columbus) and the Spaniards under Capt. Francisco Romo Uriza with 800 Indians from Bacuqua (north of Tallahassee). In a battle at daybreak the English defeated the Spaniards, killing or capturing 600. This battle was a prelude to Queen Anne’s War and the first blow for control of the Mississippi valley by the English. It ended the advance of the Spaniards up the Chattahoochee and Flint valleys and France’s ambitions in Alabama. ERECTED BY THE HISTORIC CHATTAHOOCHEE COMMISSION AND THE CITY OF BAINBRIDGE 1953" Top of the sign: Historic Chattahoochee Commission Alabama-Georgia emblem.