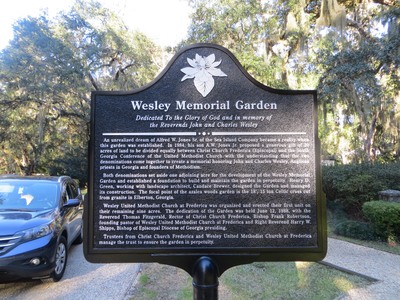 The marker reads: "Wesley Memorial Garden Dedicated to the Glory of God and in memory of the Reverends John and Charles Wesley An unrealized dream of Alfred W. Jones Sr. of the Sea Island Company became a reality when this garden was established. In 1984, his son A. W. Jones Jr. proposed a generous gift of 20 acres of land to be divided equally between Christ Church Frederica (Episcopal) and the South Georgia Conference of the United Methodist Church with the understanding that the two denominations come together to create a memorial honoring John and Charles Wesley, Anglican priests in Georgia and founders of Methodism. Both denominations set aside one adjoining acre for the development of the Wesley Memorial Garden and established a foundation to build and maintain the garden in perpetuity. Henry D. Green, working with landscape architect, Candace Brewer, designed the Garden and managed its construction. The focal point of the azalea woods garden is the 18', 15 ton Celtic cross cut from granite in Elberton, Georgia. Wesley United Methodist Church at Frederica was organized and erected their first unit on their remaining nine acres. The dedication of the Garden was held June 12, 1988, with the Reverend Thomas Fitzgerald, Rector of Christ Church Frederica, Bishop Frank Robertson, founding pastor of Wesley United Methodist Church at Frederica and Right Reverend Harry W. Shipps, Bishop of Episcopal Diocese of Georgia presiding. Trustees from Christ Church Frederica and Wesley United Methodist Church at Frederica manage the trust to ensure the garden in perpetuity." Top of sign: Image of a magnolia flower