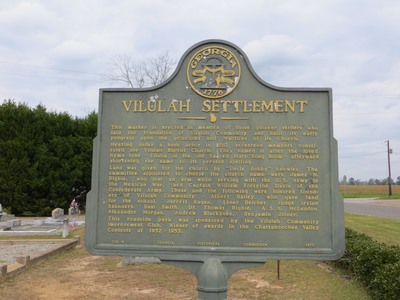 The marker reads: "VILULAH SETTLEMENT This marker is erected in memory of those pioneer settlers who laid the foundation of Vilulah Community and built its early progress upon the principles and practices of its Church. Meeting under a bush-arbor in 1867, seventeen members constituted the Vilulah Baptist Church. They named it after the loved hymn-tune -- Vilulia in the old Sacred Harp Song Book -- afterward shortening the name to its present spelling.

Land was given for the church by “Uncle Bobby” Knowles. The committee appointed to choose the church name were James N. Bigbie, who lost an arm while serving with the U.S. Army in the Mexican War, and Captain William Forsythe Davis of the Confederate Army. These and the following were honored founders of Vilulah Community: Albert Bailey, who gave land for the school, Jarrett Ragan, Abner Belcher, Judge Irvine Saunders, Baal Smith, Dr. Thomas Bigbie, A.S.A. McLendon, Alexander Morgan, Andrew Blackburn, Benjamin Joiner. This roadside park was sponsored by the Vilulah Community Improvement Club, Winner of awards in the Chattahoochee Valley Contests of 1952-1953. 120-6 GEORGIA HISTORICAL COMMISSION 1955" Top of sign: The Great Seal of Georgia – Georgia 1776 Constitution Justice Wisdom Moderation