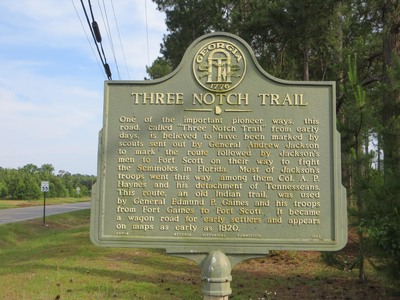 The marker reads: "THREE NOTCH TRAIL One of the important pioneer ways, this road, called “Three Notch Trail” from early days, is believed to have been marked by scouts sent out by General Andrew Jackson to mark the route followed by Jackson’s men to Fort Scott on their way to fight the Seminoles in Florida. Most of Jackson’s troops went this way, among them Col. A. P. Haynes and his detachment of Tennesseans. This route, an old Indian trail, was used by General Edmund P. Gaines and his troops from Fort Gaines to Fort Scott. It became a wagon road for early settlers and appears on maps as early as 1820. 049-6 GEORGIA HISTORICAL COMMISSION 1963" Top of sign: The Great Seal of Georgia – Georgia 1776 Constitution Justice Wisdom Moderation