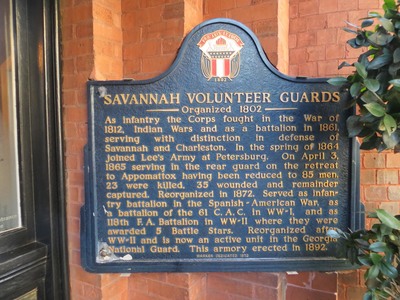 The marker reads: "SAVANNAH VOLUNTEER GUARDS Organized 1802 As infantry the Corps fought in the War of 1812, Indian Wars and as a battalion in 1861, serving with distinction in defense of Savannah and Charleston. In the spring of 1864 joined Lee's Army at Petersburg. On April 3, 1865 serving in the rear guard on the retreat to Appomattox having been reduced to 85 men, 23 were killed, 35 wounded and remainder captured. Reorganized in 1872. Served as infantry battalion in the Spanish-American War, as a battalion of the 61 C.A.C in WW-I, and as 118th F.A. Battalion in WW-II where they were awarded 5 Battle Stars. Reorganized after WW-II and is now an active unit in the Georgia National Guard. This armory erected in 1892. MARKER DEDICATED 1972"