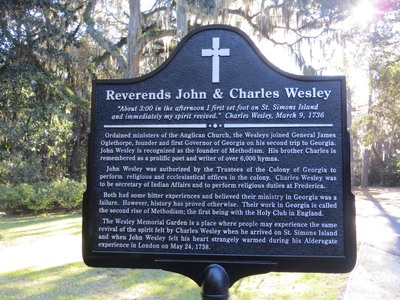 The marker reads: "Reverends John & Charles Wesley “About 3:30 in the afternoon I first set foot on St. Simons Island and immediately my spirits revived.” Charles Wesley, March 9, 1736. Ordained ministers of the Anglican Church, the Wesleys joined General James Oglethorpe, founder and first Governor of Georgia on his second trip to Georgia. John Wesley is remembered as the founder of Methodism. His brother Charles is remembered as a prolific poet and writer of over 6,000 hymns. John Wesley was authorized by the Trustees of the Colony of Georgia to perform religious and ecclesiastical offices in the colony. Charles Wesley was to be secretary of Indian Affairs and to perform religious duties at Frederica. Both had some bitter experiences and believed their ministry in Georgia was a failure. However, history has proved otherwise. Their work in Georgia is called the second rise of Methodism; the first being with the Holy Club in England. The Wesley Memorial Garden is a place where people may experience the same revival of the spirit felt by Charles Wesley when he arrived on St. Simons Island and when John Wesley felt his heart strangely warmed during his Aldersgate experience in London on May 24, 1738."